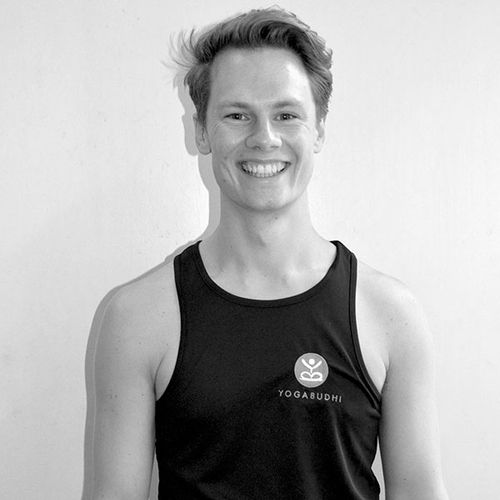 Daniel first found yoga as a way of de-compressing from the manic and unpredictable world of (musical) theatre - smoothing out the gaps between employment and unemployment as a performer.

Having no idea how much scope this ancient practice held initially, yoga became a huge part of Dan's life in 2014 when he left the industry behind and travelled to India to study the practice, philosophy and ethics of Ashtanga Vinyasa with The Yoga People.

Since then he has been inspired by a myriad of practices and traditions such as Yin Yoga/ Meridian (traditional Chinese medicine) theory, Chakra philosophy, Mandala vinyasa, Shamanism and advanced asana. His main teacher over the last couple of years has been Mimi Kuo-Deemer, from whom he draws most of his inspiration and knowledge from in thoughtfully integrating āsana, functional movement, qi gong and Chinese medicine into his Yoga classes. Recently he also spent some time (200hours to be precise) learning to lead Kirtan with Nikki Slade on her first ever Yoga Alliance accredited training in Kirtan.

Dan cherishes the gift of teaching and introducing people to the world of yoga and what it can un-lock, reveal and heal through regular practice, passion and persistence. His hope is always to empower students and enable them to explore limitless potential through a strong, concise but truly mindful practice. Expect alignment focussed classes, fluid, functional movement and simple chants to help you cultivate a steady and contactful practice.

What does Yoga mean to you?
For me, Yoga means to resist less in order to be more present for the unfolding moment. To be consistently rooted in truth, equanimity and discernment.
Favourite yoga position?
Gomukhasana or Ardha Gomukhasana . Super juicy release for the outer hips and lower back!
Favourite Inspirational quote or saying?
Finding it hard to choose between these two: "Everything can be taken from a man but one thing: the last of human freedoms - to choose one's attitude in any given set of circumstances, to choose one's own way." "Between stimulus and response there is a space. In that space is our power to choose our response. In our response lies our growth and our freedom."
Favourite meal or snack?
Coffee and some sort of Cake!
Who is your greatest influence?
Victor E Frankyl - Holocaust Survivor Urm - tough one, Well.. I love David Attenborough. He has such awe-inspiring love, appreciation, perspective and respect for the natural world. Something a great many of us are in need of re-discovering!
If you were stuck on a desert island which three items would you take?
I guess I would be needing to bring with me a lot of patience, perseverance and hope ;)

Find out about our personal plans

Find out how we can help in business