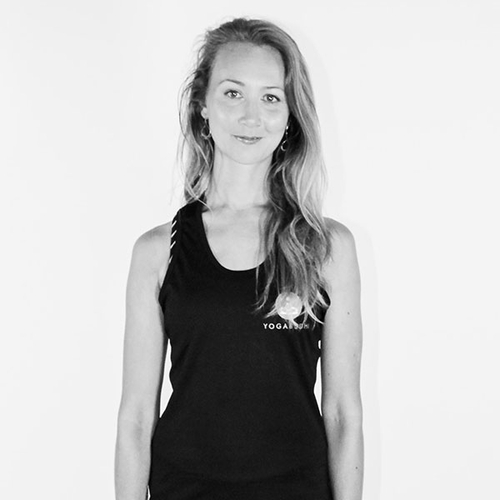 Hannah put on her ballet shoes at the age of two, and has since dedicated her life to collecting professions. After a spell in the Royal Ballet, she studied at Cambridge University, before training at the Royal Academy of Music, spending a couple of years in the West End, and most recently touring the world as a Magician's Assistant.

Yoga, however, has been Hannah's biggest revelation. Initially drawn to its physical benefits, it later became a lifeline, helping her navigate darker periods of severe anxiety disorder and depression. Thankfully now in a lighter place, she is continually awed by power of the practice to transform an overactive ping-pong ball of a mind.

So after years of steady practice, she trained in traditional Ashtanga Vinyasa, Rocket, Tripsi-Rocket and Yin, all with her teachers Jamie and Dulce (The Yoga People), who she now assists regularly on teacher trainings.

At the heart of her practice is strong, steady breath, and the search for stillness in the most dynamic of movements. Yoga is slowly teaching her forgiveness, of herself as much as others, and she tries to inspire this in other people.

Hannah extends huge gratitude to all her teachers on and off the mat, especially to Jamie and Dulce, as well as Emi Tull for never believing the words 'I can't', to Marcus Veda for introducing her to Rocket, Eileen Gauthier for the torture and Stewart Gilchrist for reminding her daily that yoga can change the world.

What does Yoga mean to you?
Freedom. Freedom from an over clogged, over thinking mind. Freedom of movement. Freedom from aches and pains that build up without it. And, for me, freedom from the darker times, mentally, that yoga can help not necessarily to eradicate, but to lighten.
Favourite yoga position?
Can I say child's pose...? No. I think my favourite is pincha. For me this sums it all up. It took me 3 years of solid practice to get close to a well aligned pincha, and probably another year to nail variations. The groundwork needed for a posture like this takes discipline, continual effort and being OK with not getting things straight away...which for me was a big lesson! It also takes intense focus and, as with all balances, once you find the sweet spot, it feels like flight...
Favourite meal or snack?
I make a mean gluten free, vegan banana and walnut muffin.
Favourite Inspirational quote or saying?
"There is a crack in everything. That's how the light gets in". - Leonard Cohen
Who is your greatest influence?
Argh can I come back to this?!
If you were stuck on a desert island which three items would you take?
A yoga mat, a piano and a kindle full of PG Wodehouse.

Find out about our personal plans

Find out how we can help in business